Summary: The Crazy Fit Vibration Plate exerciser has two crazy points that I can make out… first the price, or rather the amazon.co.uk discount brings this from being expensive to comfortably mid-range. I’m not allowed to mention price specifics (as it would go out of date too fast), so check the Product Page here to see this for yourself. The other ‘crazy’ aspect is the spec. Silent 3900-watt motor, built in speakers and cords too. 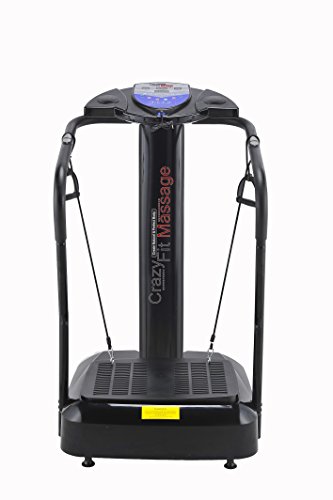 What you’ll get is the ‘2017 model’ (though I am writing this at the end of 2016), which is a serious upgrade on the last versions. There is a wall chart which comes with it, and built in weight loss programs come as standard.

The motor says 3900 Watt peak performance, though is a 2000 Watt motor. I think the important thing is that it is quiet (the comments from previous buyers agree with this) and covers a massive 160 levels of intensity. The cords are attached to the vibration plate, which significantly increases the possible exercise variations.

There are 4 separate LED (digital watch type) displays on the console, covering mode / calories / speed and time. There are also quick power buttons, which allow you to instantly adjust the intensity.

No need to be bored while you are vibration training. There are speakers built into the console which have a connection via a standard 3.5mm audio jack (the one which Apple just removed from their iPhone 7 – though everything else still has one!).

The makers claim that 10 minutes on this machine is the equivalent of ‘an hour in the gym‘. How exactly that hour in the gym is measured, I’m not sure – though previous buyers are enthusiastic about the effects of the Crazy Fit Vibration trainer, so maybe there is something to it.

Plenty of 5-star feedback at amazon.co.uk, and plenty of works like ‘Brilliant’, ‘Fantastic’ and ‘Amazing’ in the comments too. A couple of people commented that the instructions are not too clear, though assembly and use do not seem to have been an issue. Some older users were very happy with it, and several others commented that the weight is coming off – including the loss of a double chin!

One commenter left 1 star because she ‘decided not to buy this’ – pretty sure that proves something, though I’m not quite sure what!

According to WebMD, vibration plates were first used to train Russian cosmonoughts, and have since spread from Russia to Europe and the US. They work by triggering a stress reflex, where your muscles contract rapidly. Your stance on these machines (knees bent) means you strengthen your core as well as the skeletal muscles.

There is little doubt that vibration plates are useful in medicine – for patents recovering from disease and trauma (under medical supervision of course). Judging from the enthusiastic comments of the owners of the Crazy Fit models, they work well for weight loss and tone too.

Check out the (massive!) discount and user feedback for yourself now over at www.amazon.co.uk