Summary: The Homcom motorised treadmill is a starter model with some nice touches for the price. You’ll get a display (including somewhere to plug in your music!) and incline, both of which are often missing at this price level. The top speed is 10km / hour, which is fine for home use – though not generally enough for the more serious runners. This is a best selling model, with some very positive feedback from current owners – you can check this and the latest amazon.co.uk discount on the dedicated product page. 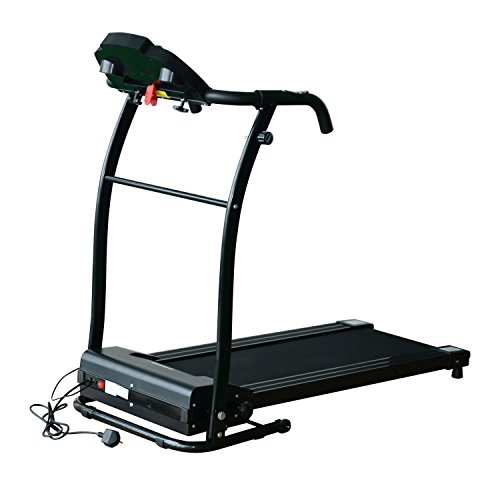 This is a solid budget treadmill that has some of the best user feedback for any model in this price range – and it folds too! It does lack some features that would make it a perfect choice for the running enthusiast, but for a beginner it does the job you want it to do perfectly. This Homcom treadmill is light and compact, though sturdy enough for users up to 120kg (almost 19 stone). It has a top speed of 10km / hour – which is enough for most people, though if you really want to push yourself (or are taller) then you might want to look at models which one which goes up to 12km / hour – for example this model from Gym Master.

You’ll find a square LCD display, which keeps track of your speed, distance and (importantly calories burned (see this article on the best equipment for fat burning for more on that topic). There is a safety stop system included too, this is a clip which you attach to yourself on a string, if you fall off then the special plug pops out and the machine stops a quickly as is possible.

Many users reported that this was an easy model to put together (15 minutes was mentioned) and to move around. There are some disgruntled people whose treadmills broke, each was either refunded or replaced by the manufacturer with no fuss. Overall the feedback left in the user comments was very positive for the price range. There will always be some people expecting a gym-spec machine for their budget bankroll – though most users were more than satisfied, giving an overall rating above 4 stars.

This is a keenly priced item which has proven to be a popular beginners treadmill – as long as you are under 6 foot and not wanting to sprint, then it has all the features (including an incline) that you would expect to find in much higher priced models. Check out the spec (and latest big discount) for yourself on the product page at amazon.co.uk!