Summary: Slendertone Connect is a ‘next generation’ abs toning belt which you can control via an app. This currently only works with iPhone (4S+) or iPad 4th generation+ technology, though I understand an Android compatible version is on the way. You can track, control the intensity and motivate yourself using the app. As for the belt – 100% of users reported firmer and more toned abs. There is a decent discount on this premium abs toning belt at amazon.co.uk at the moment – check out the product page for the latest deal. 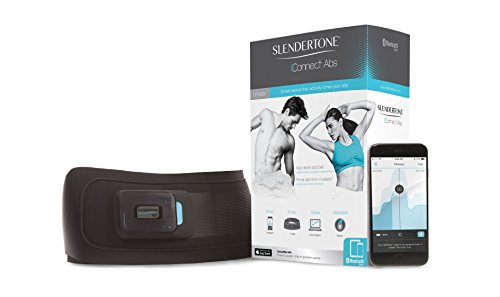 While Slendertone ab belts are not an easy route to a 6-pack (there are too many other factors affecting this – see my ‘Do Abs Toning Belts Work?’ article for more), they will make a noticeable difference to your abs and core. The fact that 100% of users reported improvements is impressive, as long as you keep those improvements in perspective.

What is different with this belt compared belts like the Slendertone Flex Abs3 or Slendertone Mens Premium Rechargable is that is connects to your iPhone or iPad via a special app. You put in your goals, and this app then creates programs tailored to meet them. These involve different schedules of use (a single longer, or several shorter sessions), and the intensity level of the electrical stimulation.

We all know that motivation can be an issue (after the initial excitement has worn off). What you’ll find with the Connect Ab belt is that this is built into the app – you’ll get encouragement to meet those goals along the way. As an option, you can share your goals and data with thousands of other users, benchmarking your progress or even becoming part of the community. I will say that the app and the control interface on the belt both look very much up to date!

Feedback so far has been excellent, with the average approaching 4.5 stars. Compared with many other toning belts, this is on the higher side. There was one complaint that the Velcro holding the belt tight did not last too long, though most people have been very positive. One user upgraded from a previous generation Slendertone belt and was impressed by this newer model. Another user reported that both husband and wife use the same belt with different programs. You should note that you’ll need to charge your belt, and that this needs to be done separately from use.

Summing it up: The app integration, combined with Slendertone’s cutting edge toning belt technology makes this the latest must-have item for fans of toning belts. The biggest omission I see is that the app has yet been modified for Android phones – though hopefully this will not take too long. With 100% of users reporting positive results, and some solid customer feedback too, this cutting edge belt should be one for your shortlist.

Check out the product page now over at amazon.co.uk